Well I want to post 2 things as I am working on another cover atm this is...all I have atm. This first one is my first attempt at a Chorus of Chorus's..this one went pretty easy there were balancing issues that I had to fix though. I think it turned out pretty good...I just miss mixing so much..*sigh*.

The second one is my first Japanese cover the ending to Mekaku City Actors days. I also got this as a request.....never get many of them...or comments either. Eh some ppl get lucky on youtube other's don't its fine. I like this song quite a bit it was fun too do.

I guess tell me what ya think really.

Also a really old duet of https://soundcloud.com/chachera/english-guilty-crown-duet ...ya youtube took it down the second it was up so...its been forgotten in the realms of soundcloud..its not that good either but. 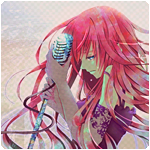