kiki wrote:I just got news that the DVD ova will be subbed in 7 different languages XD
Now everyone can enjoy it! XD

Omg yes I read it the other day and I totally freaked out. (happy freaking I mean)

Also, new character. And a good post of the characters

I'M THE ONLY ONE WHO THINKS THAT THEY'RE WAY TOO THIN? XD

THEY ARE INSANELY THIN.
They've never been anything BUT thin. xD

The trailer has been officially released ~ !
https://www.youtube.com/watch?v=dDoGjQ3OGwc
And there's something about a "Black Rock Festival" in mid-August ...
aaaaah it's times like these that make me wish I could read Japanese.
GTranslate makes a horrible mess of most things. 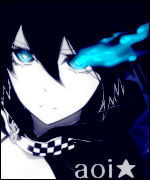 
So. While we are waiting for BRS....let's look at the figures 8D


*looks at her wallet*

Ohhhhhh boy!!! BRS is going to be awesome! Thought they keep on delaying it! DX I wish it would be out already!

I managed to catch the raw earlier~

Spoiler:
I liked it for the most part~ The music was pretty good! SASUGA RYO. (there's also an insert song featuring gazelle <3) 8D Also, the animation is really fluid, and anything in the BRS-land was really, really pretty. ;A; ESPECIALLY THE BACKGROUNDS. omg, the backgrounds. <333333 And Miyuki Sawashiro and Hanazawa Kana are good in this as usual, so it made me all happy to hear them <3

I think the structure of the OVA was really disjointed though. D: The high-school story and the fighting parts support each other and are good by themselves, but the different moods didn't really fit in with each other when they play simultaneously. and I wanted to see more fighting because it looked so goooood OTL I think it may have worked better in a linear form, but meh. XD

(There's also a scene after the credits. I WONDER IF YUU IS A YANDERE, she looked so IMA KILL YOU in the last scene 8D 8D 8D I wonder if it means a sequel....? 8D)

I'm curious to hear what other people think of it! :O (because I'm a ridiculously critical person and...yeah XD)
' 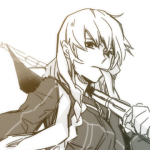 Spoiler:
1. HNNNG THE MUSIC. I would kill to get my hands on a soundtrack CD, seriously. Or at the very least a DL link for all the songs. I was actually pretty happy about Braveheart despite my initial worries, it was a good ending theme <3
I-I really want the BRS piano ver. from the end cloudworld scene. so pretty ; v ;

3. Fight sceeeeenes! Initial reactions were interesting.
"HOLY S@#! HER CANNON CAN CHANGE?!" "GOD DAMN, DM IS NINJA."
There was a lot of surprised cussing ... xD

4. Daily World scenes ... oh god. "YOMIII ~ AISHITERU YOOOO ~ <NUZZLE>" was <i>the cutest thing ever, srs</i>
I could go on for ages about the montage, too. Y-YUKATA EEEEE, and lol scary movie. What was up with those bugles in the music room scene, though. I think they were trying to be trumpets and not quite managing it ... |D;;;

5. The plot was kind of ... 'wtf'? I don't speak Japanese, and I only caught a few sentences (namely the cute scene from above and Yomi explaining her own name and commenting on Mato's being cute / good), and some of the end cloudworld stuff.
I'll wait until English comes out to comment on plot stuff, except for ...

6. The post-credits sequence!
All I have to say is ... I'd love to see more of STR, and especially of BGS -- since she gets, what, a minute of screentime? (In which she kills the protagonist or at least severely hurts her. Getting a sword shoved through your stomach is probably a biiiiitch)
Apparently everyone really, really loves Mato, though. To the point where they're incredibly jealous if she becomes buddy-buddy with anyone else. Poor girl.

sorry for rant oh god
I am REALLY EXCITED

OH GOD THE ENDING. I PEE'ED. ''I am Black Rock Shooter''. I SWEAR, THAT GAVE ME GOOSEBUMPS. The last 10 minutes are just epic. The moment that BRS hugs DM is just aaaaaaaaaaaaaaaaa.
So beautiful SOB.

The animation is just AWESOME, so smooth. And the battle scenes are AWESOME.
And holy crap, THEY ARE THIN AS HELL AAAAAAAAAAAAAAAAA.

ALSO, did someone notice that Mato uses Converse? AHAHA.

FORGET ABOUT EVERYTHING. I'M GOING TO COSPLAY DM IN THE NEXT ANIMECON. GOTTA START SEWING.

I SAW IT! IT WAS AWESOME! XD

anyway they finally decided to open an english version of the BRS website 8D
http://www.blackrockshooter.jp/en/ 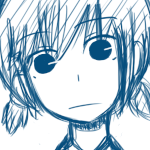 OMG I COULDN'T TYPE FOR THE WHOLE NIGHT THAT I SAW IT RAW! I FELT LIKE I JUST TOUCHED HEAVEN OR SOMETHING!

The animation and everything was so smooth and nicely organized for a 50-min OVA >A< *at least, to me it is*
And the MUSIC! FFFFFFFFFFFFF THE MUSICCCCCCCCC!!!!!!!!!! DO WANT!!!!

...Huke has outdone himself. No further questions asked.

*then becomes soulless and shoots every poster with a 1.00 caliber mini nuke*
v.v 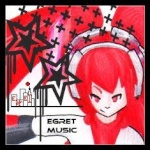 Spoiler:
One of the most antisipated animes since....... idk......anyways.
Story - even though it was an OVA, the story was very confuzing. I was going "uh....wtf?" every minute. I hope the season release clears up most of the questions
Art - Very good. Reminds me of "K-on!" But the background looked like crap. The Other world Bg was to look like crap on purpose, but the Real World bg needs more focus.
Music - Soundtrack was a win. I hope BRS the song is the OP.

So much to be said but I really don't know how to put these things into words. I'm happy with the OVA. Of course I demand more, but we'll just have to wait and see. I want the charms and the BGS figure, dammit. 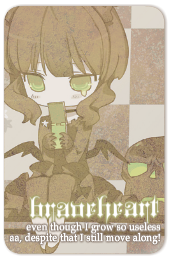 I've watched the whole.. Episode-thing? And I was like: ...What.. The hell.. Is it about? I know it's about BRS.. But what's the storyline? Must've been me, though.

Spoiler:
And that scene with Yomi and Mato was so cute. Teehee

A lot of people are confused. They like to troll us.

But they have their trolling limits. I'm sure we'll get some clarification in the future. We just need to be patient.

Mhm. I do agree on that.
Let's just wait an see.

In my opinion, the OVA completely disappointed me and made an attempt to use every cliche in existance. It also seemed like they had very little story to worked with so they attempted to stall as much as they could. The animation is nice. The music is not memorable. The fight scenes were whatever. The ending was anti-climatic and made me go wtf.

I didn't like the plot of the OVA..;; I really don't know how yomi got to there... and the story is about friendship...and is not that really interesting;;; and as I could see in the end when yomi came back.. now yuu was the one who felt jealous or angry(?).. and I really didn't lke the ending..;;
to me it just focused more the lifestyle of those girls.. I really expected a lot of this OVA.. but not sooooooooooo great... the action part was really entertaining.. but what I really don't get is that when mato found the cellphone strap. it shone and took her in a weird place and what about the black rock shooter.. is she mato right?.. it doesn't sense to me..
wh-what?! really I lost my words on how to describe this weird and poor plot..;; I thought only black rock shooter will appear.. but really even I did know mato and the other girls would appear.. I didnt know why would they appear in there.. wow.. I'm speechless;; my question is.. how did they go back to their world when mato was with black rock shooter?
how did yomi got to that world?
and what with yuu in the other world.. I mean.. she just appeared there.. but nothing.. just standing there.....
I have a lot of things to say to the plot.. but can't say it in words because I really didn't like it....

I thought the OVA was really good! I like the animation and the music. The plot was okay but it's confusing to me. I'm trying to figure it out but it's hard...but overall I thought it was good. 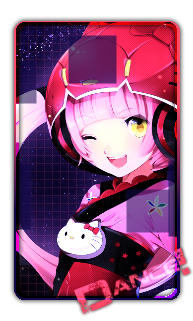 I'm not very satisfied with the OVA, I wanted more action and everything, it was a crappy story about friendship and bla bla

I'm not sure of the sequel but I know for sure they're gonna make a video game of it XDDD ON PSP! 8DD 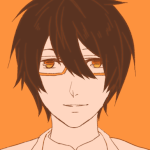 i got a dvd of it with the BRS figma i was so very confused when i watched it i didnt really like it and my sister being super otaku forced me to watch it 5 times over and over...

BRS has gotten a lot popular in Japan o_o;; It's so crazy! -in love-

I'm super happy that there's going to be a game and an anime for it, but saddened that I have no PSP ;_;

The trailer came out just.... yesterday, I think... It was released last week.


And I heard that the anime will be released 3 months after the game? oAo; Not sure if that's true, but I highly doubt it after what they did to the OVA.

It's actually hard to understand at first, but essentially...any BRS parts is AFTER the real-world parts. They make it in a way that the story is somewhat jumbled, but it fits if you connect the dots.