Soo I thought it'd be a good idea to post my covers that I've done on a topic. I only ever really sing in English, 'cause I don't know a lot of Japanese. So far I've only done 5(ish), though I plan on doing more in future. They're almost all on my soundcloud account, so here's the links, ordered from most recent to least:

(is there way of doing an embedded soundcloud player btw?)

Six Trillion Years and an Overnight Story (KemuVox)
For this cover my friend played the guitar and sung it, and I did everything else (We made the backing track ourselves :3)
Soundcloud:
https://soundcloud.com/palette-project/six-trillion-years-and-an-overnight-story-palette-project-cover
Youtube:

My friend and I (we call ourselves 'Palette Project' https://www.youtube.com/channel/UCXIT1jTHJA_bgPb7pAb_WWw ) plan on doing more in future and posting them here, but this is all thus far. I'll probably end up posting all of them to the palette project channel too.
Feedback/criticism of some sort would be incredibly useful ^_^

I did another take of Sarishinohara, which is (hopefully) much better than my last one:

Me and someone else did another cover ^_^
He did the singing, I did the mixing ~

I hope to be able to have these on youtube with videos sometime in the future... but for now I guess soundcloud will have to do.

(Any replies would be appreciated btw)

Okay, two more tracks today, one of them being an acoustic arrangement made by us ^_^

Both of them again being from the Sarishinohara series by MikitoP.
Got more cool stuff planned.

This time it's of the ED to Kekkai Sensen: Sugar Song and Bitter Step

Okay so now we've started getting some content onto our youtube channel, starting with the complete Sarishinohara series

The videos were done by Soli, and it says in each video who it is that's singing.


Thank you for your time

New cover! This time with our own instrumetal track ^_^

First of all, I would just like to say, I think your covers sound really great, and you were able to blend the voices with the music really well in all of them, and so great job at that, because in my opinion, that's super hard.

You said criticism would be useful, so I'll also point out two little things I noticed that might be a good idea to look into. The vocals in a few of them sound pretty muffled, and its a bit hard to make out exactly what is being sang at times, so you may want to work on clarity a bit more, and besides that, occasionally it feels like the music overpowers the singing, and I can't exactly hear the vocals that well, because of it.

I just wanted to just give that input, so that you'd have some ideas to look into, and ultimately everythings upto you, but in closing, I still just want to say that I love how the songs are done, and you're doing great! 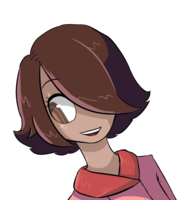 This is some pretty insightful information, I'll take that into consideration when mixing/recording future covers. I'm curious, which songs in particular were you talking about?

I'm glad, I hope the advice will turn out helpful, and the like!

Some specific examples in songs would be your most recent, which sounds pretty muffly, still the singing sounds nice, but yeah it sounds kinda muffled. Its also better than the other example I'll say, in terms of loudness, but there still is some points it sounds pretty quiet at occasional times, paired with the muffly-ness, well I'll just say I'm very thankful for the subtitles. But yeah, I still consider it incredibly successful despite that.

I also looked at one of the older covers, which was Six Trillion Years and Overnight Story. This one, also great, however I really really was wishing the vocals were  louder, and so this is an example of where the music really drowned out the singing. I'm not sure if it had some of the muffled thing as well however, because usually I couldn't hear the lines so much.

And again, I just wanna say, I've thought your covers sound really really neat, and I hope you can improve a lot, to get even more awesome! So like, just know you're doing great, and I can't wait to hear more from ya!

Ooh that's interesting, I assumed you would have been talking about one of the older ones. What kinda speakers/headphones were you using to listen to it?
And yeah, I agree that the vocals on Six Trillion should be louder.

But yeah thanks again, these comments should bring improvement of some form.

I honestly only have a cheap one eared headset, from Insignia. Perhaps that affected the quality that I heard? If so, my apologies.

I hope so, and Imma just say, I can't wait to hear more music from ya, cuz its pretty cool, and stuff!

Oh right, the headset would probably explain it actually (I hope). Still, this has made me aware that I need to try and mix songs for more than just the headphones I'm using. I'll bear that in mind.

Thanks for the third time, your comments really are useful ^-^

Hello to anyone that might happen to be reading this!
I haven't posted in a while to here or to youtube, but here's a quick update.

The latest thingy of me trying to sing:

And also I did a piano inst version of the ending song to Erased (Boku Dake ga Inai Machi). I'm quite happy with it, so I hope someone does a cover using it at some point... hopefully it's not too hard to sing to: