DEADLINE FOR SINGER AUDITIONS:  4TH MAY
i probably won't be free to record until my finals end in may but i wanted to get scripting/artwork (that i'll be doing!)/animation out of the way first--- "orz

* please sing the either one of the bolded verses and the chorus for your audition.
* send me the raw vocals, timed to the off-vocal.
* if you think you know how to do the harmonies, feel free to record those as well! however, please upload them in a separate file.

tweaked the audition criteria slightly - you can now choose to sing either one of the bolded verses and the chorus for your audition.

Is this still open? 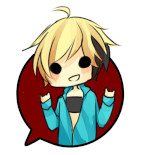 I was wondering if I was allowed to audition in a +2 pitch? ;o
I don't mind doing it in the original pitch either, but the chorus gets rather low |'D

thank you so much for showing interest in this aaaa ;___;

I would like to audition for this, as well. The "rap" part (after the first chorus) is honestly giving me a little trouble, though. Even though it's not part of the audition, I'm a little worried about it. ^^;


My new mic is coming in tomorrow, so I'll probably have a go at recording an audition then. c:


Edit: I didn't want to double post, so I'll just add the link to my audition in here: https://app.box.com/s/x5kfxmcmpoebvc7ne5msnr3d2v38pzzu


Also not sure for breath breaks on the chorus, but I tried my best to make it work, haha. I could also do the other part as well, (GUMI's?) but that part's rap gives me more trouble than Miku's, where at least I have some of it down.


P.S. Sorry for the boom sounds in the background of some parts of it...for some reason, someone in my neighborhood was launching fireworks. u-u;

sorry for the late reply! i've been cramming for finals lgfdshj

thank you so much for your audition! ;v; depending on how comfortable we are with each verse, we won't necesssarily have to follow the parts in the original video!

and thank you for the correction ;;;; i tried checking the lyrics for accuracy, but my ears aren't very keen "orz

i don't want to keep you waiting for results too long, so the new deadline will be on 4th may!

thank you so much for your audition!! ;w; choosing is going to be so difficult klsdfj sobs ;;;;;

Any word about this yet, Prince?