I need some major help with this!
For a while now I've been trying to figure out how to genderbend and I'm unsure if I'm doing it right. I know to use the upper throat and head voice because I've plenty of practice getting that because of voice acting but I can't seem to figure out what to do next, I can seem to hit a shota tone as you'll hear in my Shota Shota Night Fever below:


Generally my voice is normally a medium with some medium-low undertones. But I have the capability of hitting higher tones due to practice, any help would be greatly appreciated seeing as I want to use it for choruses, duets/selfduets, and solo covers. It seems fun, so once again if anyone can help me thank you!

Yuukai~ are you trying to sing like a shota intentionally or wanna sing like a girl and trick people? XD Hm...You could try building a higher range in singing. Also girls and guys sing differently. I don't know how to explain it but maybe it'd help if you listened to a girl sing carefully and imitate the parts that give the feminine sound. No worries about the undertones of your voice. Some girls have that low undertone and without a doubt you can tell it's a girl. /rant

Omlette~ well I guess you can say that I want to do both. xD But I especially want to sing like a girl to trick people. XD I'll try to build a higher range. Hmm..I suppose I should listen more closely to that and imitate it. O: Ah gotcha' I was always worried about dem undertones. ;D

Good luck, I'll see if I can dig anything from google. I'll let you know if I find some helpful stuff :D
edit: you can try increasing your range by doing the exercise here: click
If you can't read the notes you can assume the first note of the first exercise as "Do" (as in Do Re Mi Fa So La Ti Do) then it'd be: Do re mi re do
The second one could be read as: do do re re mi re re do do
Seems it's supposed to increase your vocal range slowly and comfortably /o/

ASDFGHJKL;
im jealous of your low voice ;A;
BUT YOU'LL NEVER SING AS HIGH AS ME AND TRICK PEOPLE >:D
lol i just kidding, you might have the hang of it, just don't try to sound TOO cute, cuz then it throws off the voice C:

ahem-anyways, I think female voices are "thinner", not just higher. I've tried sounding like a guy and I can go pretty low but no matter how low I go, my voice still sounds female because it's not thick enough.

I think it's nearly impossible to completely gender bend without special effects. xD

^Actually, I kind of disagree with this. I think your current sound is a little too thin. The reason it sounds unnatural is because it lacks complexity. Let your voice go a bit more? .___. But then again, I wouldn't know, right? 8DDD Good luck, Peetah~! 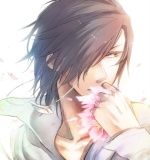 Mmm i'd say clench ur throat but thats bad, but usually sometimes when i like to go lolita on ppl i clench my throat to make my voice higher lol.

but yeah clenching ur throat is an idea but not recommended, and also having a higher range is a great idea.

also my trick to keep my voice low is to speak, hum, and sing a monotone note in the lower range so that idk say... a few hours later i speak in a lower pitch. so you should try say... speak, sing, and hum in one of the notes in between ur chest voice and ur head voice for about an hour max, but beware the effects may last a while xD

also with aeriia's idea, i actually genderbend (ihopenotalotofpeoplereadthislol) because im actually a girl //.shot, and my voice (now deeper OTL) is similar to a guy's hurhurdur, i've been said to sound like kuroneko and valshe AT TIMES... some people even say i sound like MrSoundlessVoice (a.k.a Len the Youtaite) but not all the time lol. but yeah sometimes i do sound like a girl. It's just the matter of controlling that uhh manly power? lol

the more you sing one way or the other such as loli or whatever, try to sing more everyday with that...when I first start off I didn't know to sing loli...but if you practice everyday you'll get a hang of it same as doing a low voice..sing low time to time practicing it ^.^ I was able to hit one part as a guy then the rest failed and sound like a female still lol
yeah..--> I failed at this failed male voice

let me ask you a question before i giving you tips and lastly my trap voice experiences.

anyway,
your falsetto is good~ but the dynamics and pronunciation is abit too out of shape.

if you want to do it with falsetto~ its isn't that hard but it will takes around a year to master.
(this practice / training does make your voice stuck. like VIPTenchou. after your voice stuck, please do find a way to return to your male voice back within half an hour.)

*How to know when should you stop training for the day?
when you realise your voice got hoarse. if not, time yourself 20 mins of training a day.

following ways to do falsetto(sounding female-ly):
- Do it like a OPERA singer, but put more POWER into it.
- Pronounce "Ho~" like an Owl.
- Humming in a very HIGH pitch.
- Shout "Yahooooooo~~!!!" in your highest TENSION.
- Sigh in a very high pitch.

*Then for the Dynamics and suchs~
pronounce A, I, U, E, O.. Ka, Ki, Ku... etc.
(as i experimental it, any words with the pronounce of "I" is usually sounds deeper and more moist than the others.)

other than falsetto you can try the alternative way, by enlarge your vocal range~~
its better if you have a software keyboard. then use the white keys, one by one follow the notes and sing it.
but the process takes quite a long time like a week or month to enlarge it.

after you have enlarge,
you can try speaking in your nose voice and add more power.
then follow the (*)

soon enough you get the hang of it. you can try singing it~~ but to sounds really female, as i said.. takes up around 1 year to master.

then slowly take your time practice in that voice.

as for my experiences,

when i was small I imitates people voices around,
then i quit after i was being verbal bully saying "why do you do suchs funny voices like so girly?" by my friends around. (that time i was mentally weak.)
XD

so after a few years, just right after a few weeks i enter YTC community.
i've learnt about this nico singer named Sekihan.
and so he did female voice in the magnet duet with piko, i was amazed.
so i've started imitate his voice by any method i used.

then, after a few months i met a lot of friends from nico nico douga(nico chuu friends), they give me some tips on what is what, but they said is better to develop a study yourself.
so i did some research on vocals and such.
and i did a lot of experiments using my own vocals(now my vocals is spoiled).
studied alot of things like pronunciation betweens guys and girls.
the sounding effects etc.

having a history of 2 years and 7 months of Vocals and singing.
i've learnt alot of things~~ XD

due to my vocal is spoiled, don't worry~
i can do a switch of my vocals like from rocky to soothing, high to low etc.
XD hopefully you also can learn something great like me too~ XD haahhaa.. =w=

off~
i use trap voices for only singing purpose.
only if i cant reach the certain key or notes / pitch.
but mostly using the nose voice more on it~ falsetto is for the practicing use.

I've recently thought about harmonics. When you sound one pitch, it actually has many overtones that blend to make one pitch.

(Here's a Wiki page for all the science talk: http://en.wikipedia.org/wiki/Harmonic_series_(music)#Partial)

Men tend to have more overtones in their sound, so one way to sound more feminine is to eliminate overtones, and that's commonly done by narrowing the vocal tract, which creates a decent amount of strain on it. =/

That being said, it's easier to eliminate overtones than to create overtones, one reason why true female genderbenders are hard to come across.